If there is one movie I would suggest every woman (and dudes who are into romantic French comedies) to see, it would be Amélie. Just writing the title of the film alone gives me goosebumps and for all good reasons. Gracing the world of cinema in 2001, this movie has stayed in my heart and mind since the very first time I saw it due to it’s breathtaking beauty and romance. It is described as a French romantic comedy, however it is so much more than that, so much. Directed by Jean-Pierre Jeunet and starring the beautiful Audrey Tautou, it follows her character, Amélie, a barista at a café, around in her daily, Parisian life. One day while hearing the news of Princess Diana’s death on the television, she has an epiphany calling her to help others, including but not only, her father, a timid shop boy, and a recluse neighbor, to have a more meaningful existence. In her quest she comes along Nino and it is then when she leads him on a wild goose chase of romantic clues all over Paris. This is one of the most genuinely brilliant and heart warming films I have ever seen in my life. About twice a year I make it a point to grab a delicious bottle of wine, cozy up on the couch and get taken away by Amelie. Basically you feel artsy, Parisian, in love, happy and more full of life and compassion after a viewing of this subtitled beauty. Here is why? 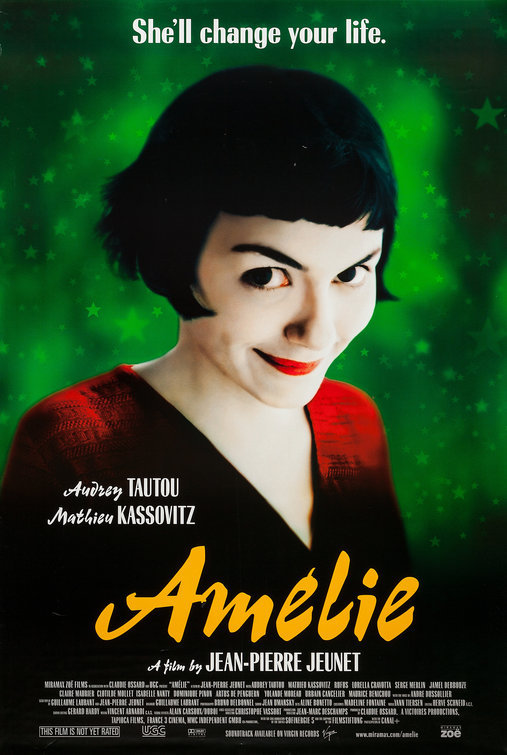 THE SOUNDTRACK. I put this is all caps because it is one of the most captivating parts of the film. It was composed by a genius of a musician by the name of Yann Tiersen. It is all instrumental with perhaps one or two songs with minimal vocals. Think Parisian bistro music that takes you on a roller coaster of musical emotions. I throw this on repeat when I write, am on a flight and tuning out (or “in” depending on how you look at it), or when taking a nice long walk. Or as my college roommate and I used to do, smoke grass, drink Pepsi with Splenda and whip out That 90’s Game on many a Friday nights. We were really wild like that. It’s stunning music, to say the least – I wrote this entire post to the soundtrack on repeat. Check it out.

It’s vibrancy! All of the elements of this film, the colors, the sound mixing, the cinematography, the dialogue, all of it is completely captivating. You don’t want to miss a single moment of it because there is so much going on and it’s in the details of this film that really grab hold of you.

The characters are beyond. Oh my gosh, the cast of characters here is delightful. They are so funny, engaging, and extraordinarily unique. And not just their personalities, but their individual stories as well. You will fall in love with them all.

It’s a mild emotional roller coaster. If you are a warm-blooded human, you will most likely experience a combination of laughter, tears, and warmth in the heart area. The tears are not so much from sadness as they are more from nostalgia and happiness for the characters. And again, it’s the perfectly paired soundtrack that really helps tug at the heartstrings. It’s genius, truly.

It’ll open up your mind and your heart. It has such a way of making the viewer feel and sense more compassion. Personally, every time I watch Amélie, I am not only reminded but encouraged to be kind to my fellow humans. I’m telling you, it’s a feel-good movie. It’ll have you going out of your way to make someone else smile. In regards to opening the mind, at one point in the early minutes of the film, the narrator asks of how many people in Paris are currently having an orgasm. Now think of the city you’re in and have a ponder at that.

It’s so loved by so many. This film did exceptionally well worldwide by the average moviegoer and critics alike. I miss spoke not long ago and said that it won best foreign film at the Oscars but alas, it did not. Although in my heart it wins the best film…ever. In 2002 it was nominated for five academy awards including; best foreign language, best sound mixing (it’s unreal), best original screenplay, best cinematography, and best production design. The New York Times has credited Amélie as one of the best 1000 movies ever made. It has been said that some 500,000 movies have been made. For me, it’s my number one. Truth.

Amélie is darling. She is sweet and soft-spoken as well as very creative and courageous. Her spontaneity is admirable as is her lust for life, her whimsical imagination and the want for others to be happy. Audrey Tautou is such a freaking brilliant actress that she is capable of enticing happiness not just from her fellow characters, but her audience as well.

There is a garden gnome as a character. Need I say more?

Whimsical. If there was one word I would use to describe Amélie, it would be whimsical. You’ll need to see it to understand why.

Broadway, here comes Amelie! Starting this month, Amélie will be adapted into musical on Broadway. This story is so amazing it needs to be told on the stage as well.

Amélie is art. Here is a look at artists’ creations straight from the inspiration that is Amélie. If you have seen the movie already, you will swoon over these. Trust me. I NEED this pin for my enamel pin denim vest I started. Mmmhhhm yup. Don’t judge. 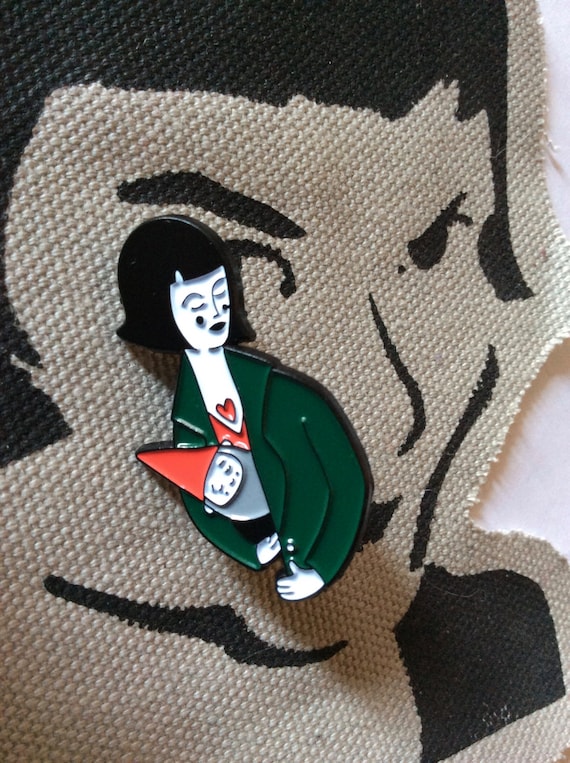 Ok, I think my bi-yearly viewing of Amélie needs to be sooner rather than later. It’s one of my favorite stories ever told. I would LOVE to hear your favorite scene or story about Amélie.

« What It’s Really Like To Be A Yoga Teacher
How To: Dementia – Preparing Visitors and Hosts »

Yesterday, Anthony and I took a stroll in the West